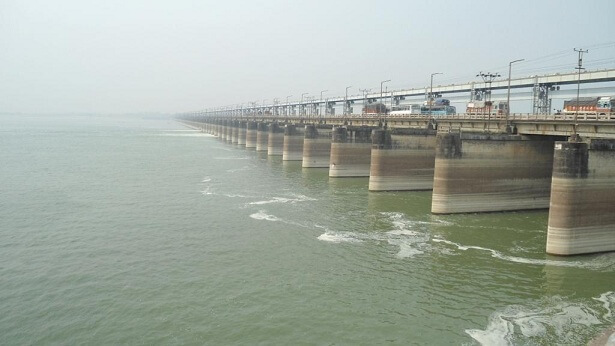 The Inland Waterways Authority of India (IWAI) has awarded the work for the construction of a new state of the art navigational lock at Farakka in West Bengal to a private firm at a cost of Rs 359 crore, under Jal Marg Vikas Project (JMVP) which is being implemented in National Waterway-1 (River Ganga). A navigational lock is a device used for raising and lowering ships/vessels between stretches of water of different levels on river and canal waterways. The existing lock gate at Farakka which has been operational since 1978 is old and inefficient. Since the modernisation of the existing lock will entail closing down the lock gate for to 8-10 months, it has been decided to first build a new navigational lock and subsequently the modernisation of the existing lock would be undertaken. With the existing lock, it takes about 2 hours or more for a vessel to pass upstream or downstream of Farakka. With the new lock, it will take only 38 minutes for a vessel to pass through. If movement of a vessel is followed by movement of another vessel in the reverse direction, the operating time will be 23 minutes only. The new lock is proposed with modern state of the art features like electro hydraulic operations of Mitre Gates and Radial Gates on filling culverts and remote control operations of all the gates from a central control room. The Farakka navigational lock is the third major work to be awarded by IWAI this year on National Waterway-1. The contract for construction of Multi-Modal Terminals (MMT) at Varanasi and Sahibganj were awarded in May and October 2016 respectively. The process for awarding work of the multi-modal terminal at Haldia is in an advanced stage, IWAI said. The Jal Marg Vikas Project is being implemented with technical and financial assistance of the World Bank at an estimated cost of Rs 5,369 crore for plying of vessels with capacity of 1500-2000 tons. Phase-I of the project covers the Haldia-Varanasi stretch which includes development of fairway, Multi-Modal Terminals, strengthening of river navigation system, conservancy works, modern River Information System (RIS), Digital Global Positioning System (DGPS), night navigation facilities and modern methods of channel marking etc.

Development of Inland Waterways in the Country →